Bilbao through its bridges

Here we tell you some details and events that occur.

How to use it?

Travel along the path of river estuary of Bilbao, knowing its most emblematic places. Enjoy the beautiful surroundings of the estuary, immersed in a latent city, cosmopolitan, modern and ancient. Know its streets, its customs, its people. A hallmark in its gastronomy, culture and art.

The authorship of the four current fixed bridges, the San Antón, La Ribera footbridge, La Merced and Arenal bridges, built after the Spanish Civil War, and inaugurated on 19 June 1938 even though the works were still several months away from completion, is attributed collectively to the Technical Office that was in charge of their reconstruction.

“To direct the Oficina Técnica Municipal de Puentes Fijos (hereinafter OTMPF), the civil engineer José Entrecanales Ibarra (Bilbao, 1899 – Madrid, 1990) was appointed, who would remain in the post until August 1938, and the civil engineer José Juan-Aracil Segura (Alcoy, 1905 – Madrid, 1982) was also hired. As a matter of urgency, the military authorities were asked to grant a leave of absence to the civil engineer Ensign Manuel Gil de Santibáñez (or Santivañes) (Madrid – Don Benito, 1938) for at least one month, although we have no record of the exact time he remained in Bilbao. On 15 August 1937, the civil engineer René (or Renato) Petit de Ory (Dax, France, 1899 – Fuenterrabía/Hondarribia, 1989) joined the office, better remembered today as a football player.
Along with the architect Manuel Galíndez, the architects Luis Vallejo y Real de Azua (Bilbao, 1901 – Getxo, 1964) and Fernando Arzadun Ibarraran (Bermeo, 1893 – Madrid, 1951) also joined the office, as did Fernando de Urrutia Usaola (Amurrio, 1908 – Madrid, 1960) between 1 November 1937 and 30 May 1939…”

“A notable aspect is the collective and interdisciplinary nature of the authorship of the projects and the management of the works”.

Joaquín Cárcamo Martínez
Quantity Surveyor. Member of the Basque Association of Industrial Heritage and Public Works AVPIOP-IOHLEE
Member of the Advisory Board of TICCIH Spain

Text extracted from the book of the international seminar “Falling and rising, the reconstruction of heritage after a war” (PDF) held in Bilbao and Gernika-Lumo from 1 to 3 October 2015 (pages 71-74). 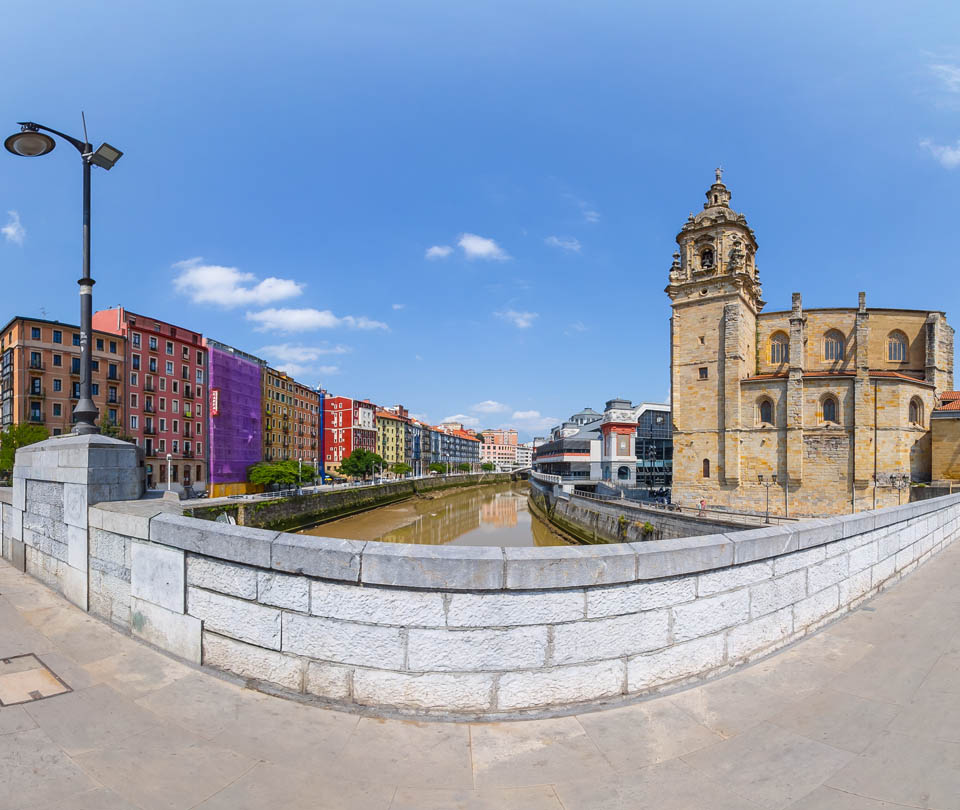 For centuries it was the only point of union between both banks of the Ría de Bilbao.

Converted into one of the emblems of Bilbao as part of its coat of arms, although the location of this bridge, in the coat of arms of the Villa de Bilbao, reflects the old 15th century bridge built at the foot of the tower of the church of San Antón.

Of historical importance as it is an obligatory step for the commerce of Vizcaya with the Kingdom of Castile, after the privilege granted by Mrs. María Díaz de Haro.

The floods caused significant damage to the old bridge and it was decided to build a new one on the other side of the church, a project commissioned to the architect Ernesto Hoffmeyer. Work began in 1871 and was not completed until 1877 due to the Carlist Wars. Both bridges coexisted from 1877 until 1882, when the old bridge was demolished. 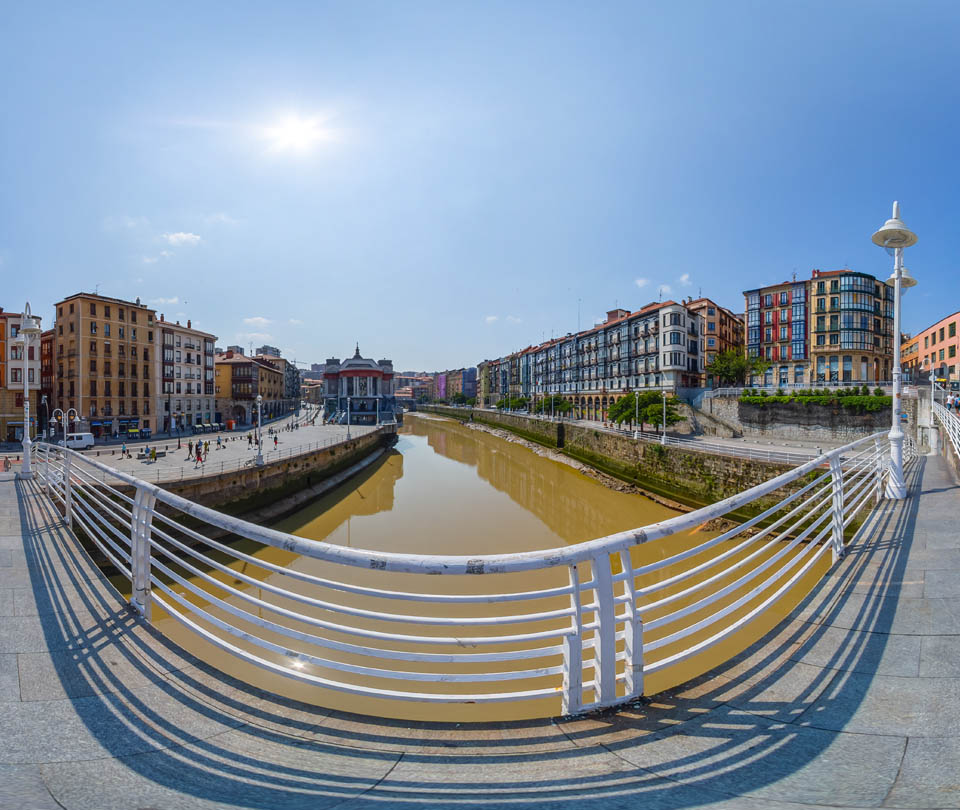 “It is essentially resolved in the form of a parabolic arch that links Marzana with the Ribera. From the keystone of this arch, a straight section emerges that connects with the layout of the streets Conde de Mirasol and Aréchaga through the small upper public space of Marzana”.

«Organized, structurally, on the basis of two beams articulated by three hinges that are inscribed in the variable-depth deck, the solution boasts a happy slenderness on which only the designs of the railing are superimposed on which the elements are manifested. slight characteristics of the architect’s own style».

“Time has not treated with the precise care this interesting work of architecture, whose quality makes it comparable to the recently created pedestrian walkways in the Villa”.

Several bridges existed before the current one, perhaps the most popular is the one that existed between 1827 and 1852, a bridge suspended by iron chains, the old suspension bridge referred to in the popular song “No hay en el mundo, puente colgante, más elegante, que el de Bilbao, porque lo han hecho, los bilbainitos, que son muy finos, y muy salaos” (There is no more elegant suspension bridge in the world than the one in Bilbao, because the little people of Bilbao have made it, they are very fine, and very smart). 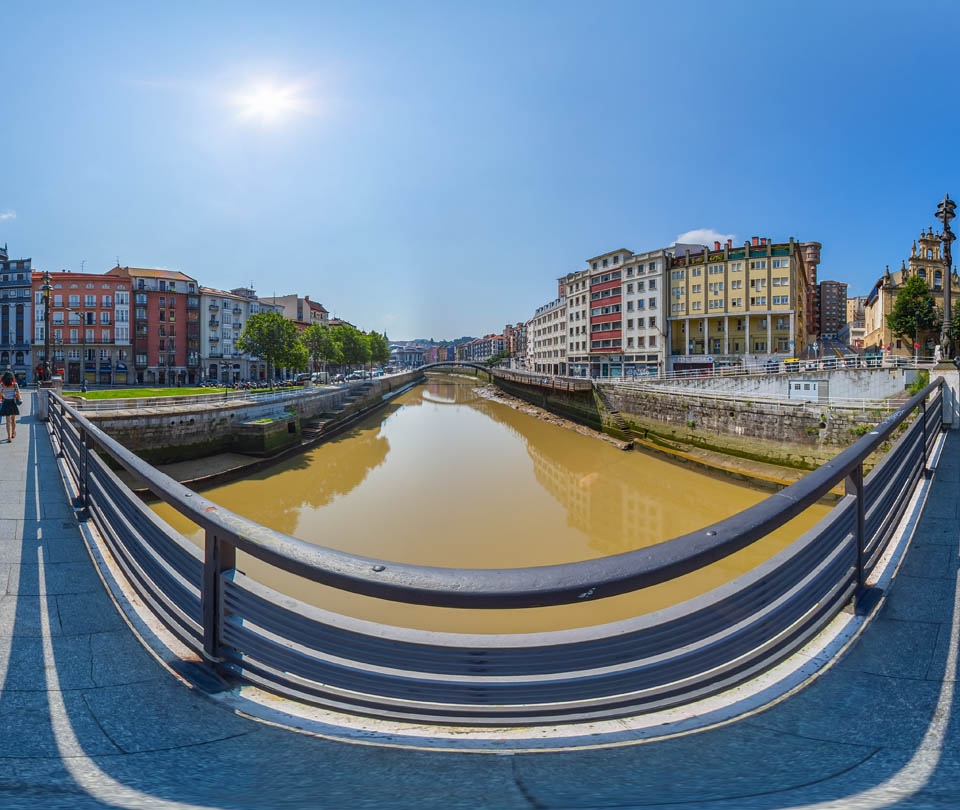 It has a simple, spartan design, with two asymmetrical bays resting on a central pilaster.

It takes its name from the convent of La Merced, nowadays the Sala Bilborock, a venue where concerts and social events are held.

Eight cast iron lampposts replace the original ones that were destroyed during the 1983 flood. Adorned with pairs of winged creatures, these beings make us imagine ancient legends and envelop them in a mystical aura. Who knows, don’t stop touching them looking for the luck behind the urban legend. As can be seen in these photos: Photo 1 – Photo 2, (Photographs by Salvador Ramón de Azpiazu Imbert (1867-1927).  Ayto. de Vitoria-Gasteiz Fondo Azpiazu) . These beings were also to be found on the lampposts that formed part of the Isabel II bridge around 1900. 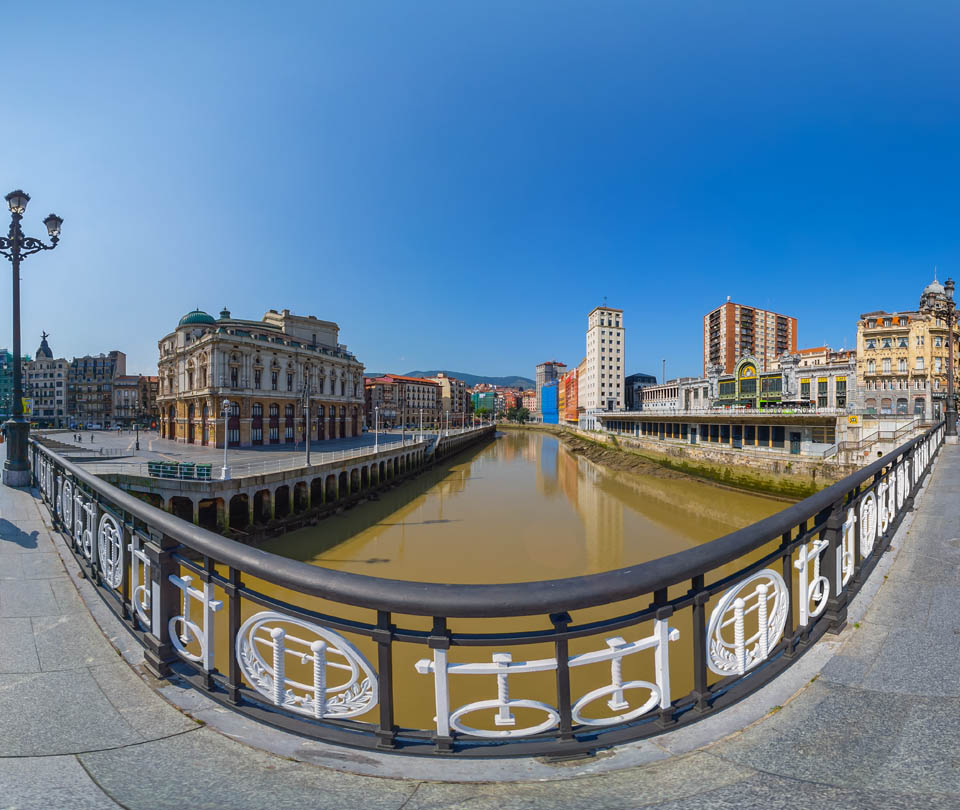 Built in reinforced concrete, it is the last of a series of bridges, renovated and destroyed for various reasons.

The first bridge to occupy this site, in 1845, was named Isabel II, was made of cast iron and was the first of its kind to be built in Spain.

One of the arches that formed part of this bridge is preserved mounted on a bridge at the mouth of the rivers Udondo and Gobelas, in Leioa. Udondo Bridge 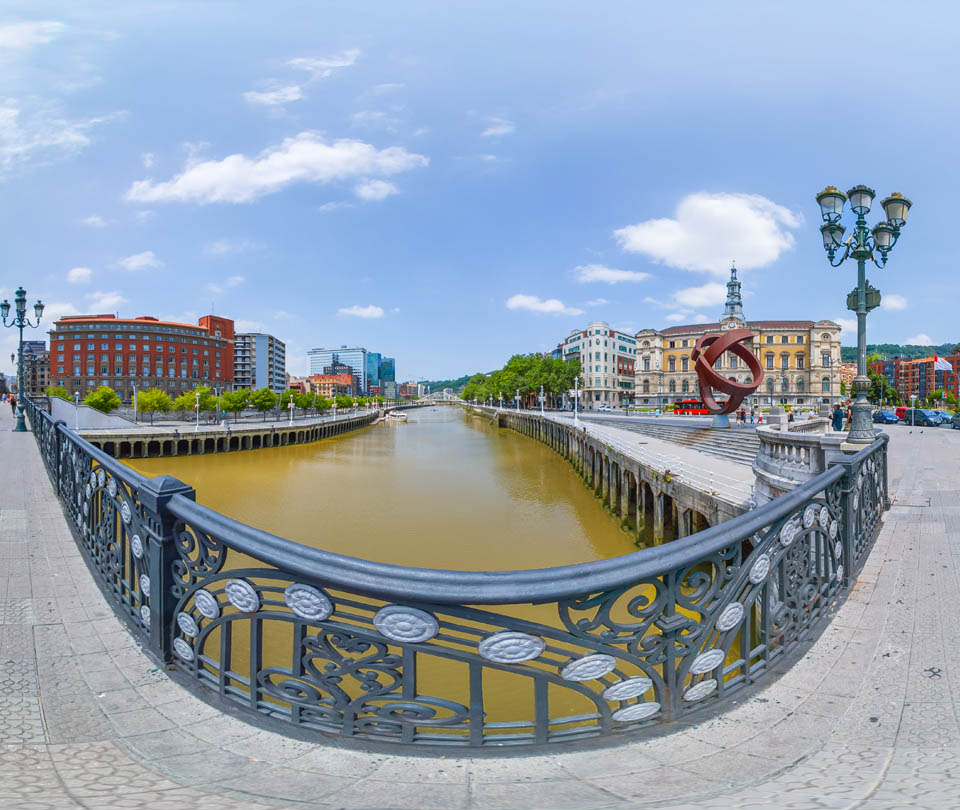 Inaugurated in 1934 and after being destroyed during the Spanish Civil War, the engineers Ignacio Rotaeche and José Ortiz de Artiñano were commissioned to build the current bridge, which was reopened in 1939.

In the past, this bridge cohabited with an iron footbridge a few metres away from the current one and of a private nature. Charging a toll to cross it, this footbridge, whose name was Pasarela Giratoria de Hierro, was known as “Perrochico” because the toll was five cents and that was the popular name for this coin. Both allowed the passage of boats. The footbridge pivoted on its axes on both banks, while the current one was raised in two halves.

Built in iron, it lost its tilting feature in 1969 and was sealed to prevent it from opening. 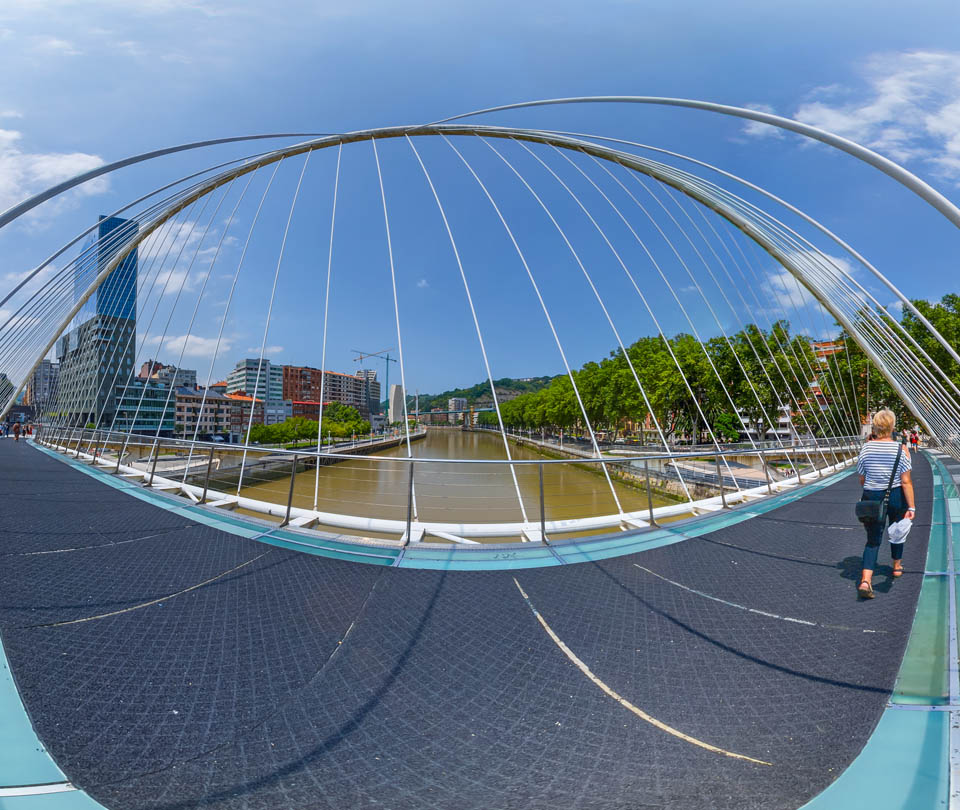 This pedestrian footbridge, designed by the architect Santiago Calatrava, was inaugurated in 1997, is 75 m long and rises to a height of 8.50 m above high tide. Two access ramps in two sections, each 2 m wide and with a gradient of 7 %, cross the steep slope of the footbridge from one side to the other. The footbridge is supported from the arch by tensioned cables of 30 mm in diameter which are anchored to the steel arch.

Since its inauguration it has been one of the symbols, together with the Guggenheim Museum, of the new Bilbao of the 21st century.

It joins the Campo de Volantín with the Uribitarte dock with access to the Isozaki towers, being one of the walking routes to the Guggenheim Museum.

The glass surface of this pedestrian bridge has generated a lot of controversy, and today it is covered with a non-slip mat. 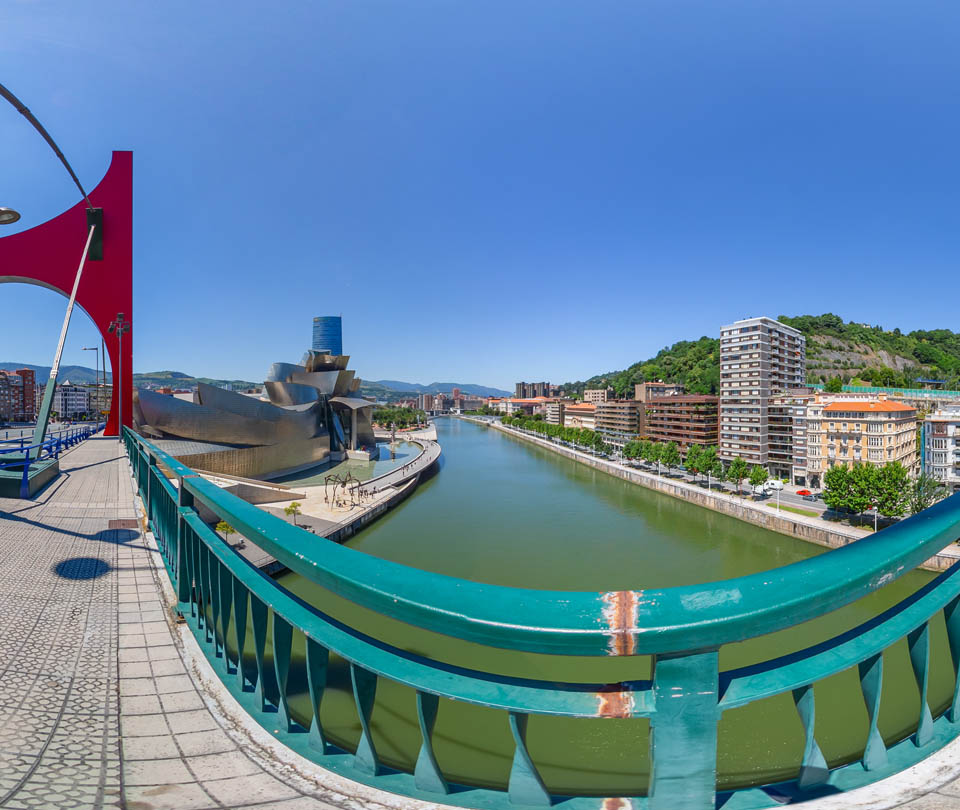 The engineer Juan Batanero was the author and in charge of its construction in 1968. Inaugurated in 1972, its official name is Príncipes de España.

It was the first in Spain to be built with stays and is one of the few with an iron deck. The stays are anchored to two 60 m high masts and support the 270 m long deck.

From the right bank of the Bilbao Estuary, in the Campo de Volantín, there are two lifts that allow access to the bridge as well as stairs.

A structure in the shape of two red arches wraps around the two masts where the bridge stays are anchored, this structure is the work of the French artist Daniel Buren, “L’arc rouge” (The red arch), this work was inaugurated on the occasion of the tenth anniversary of the Guggenheim Museum and aims to integrate the bridge with the curved forms of the museum. 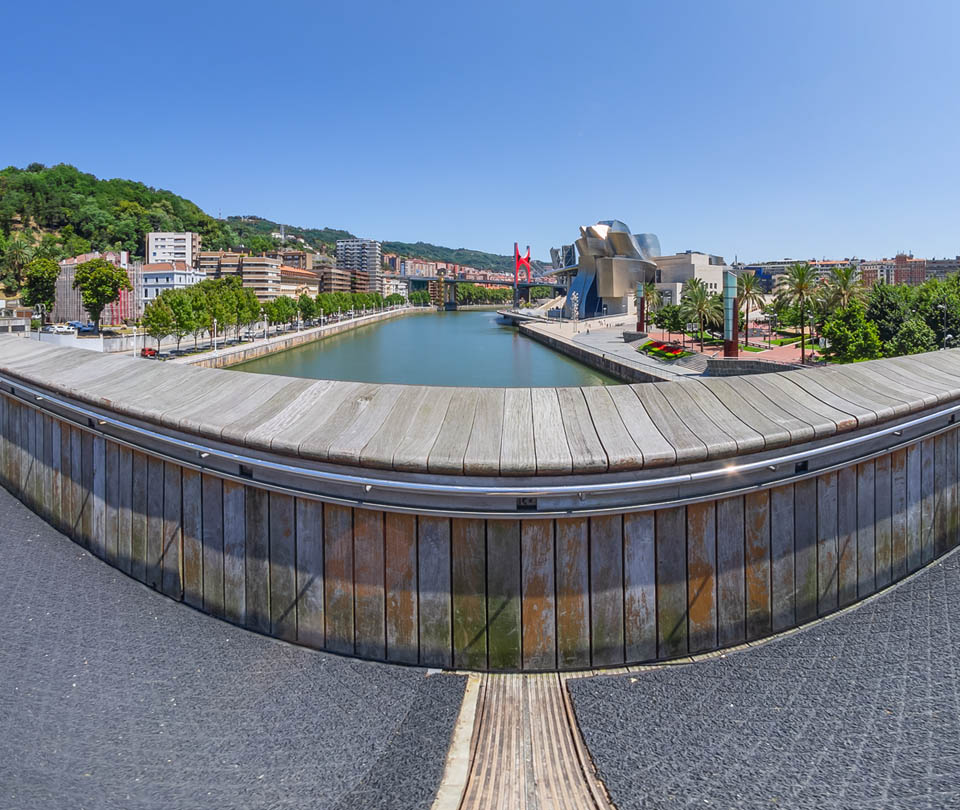 This pedestrian footbridge, in the shape of a dragonfly, links Paseo de Abandoibarra with Avda. de las Universidades.

It is named after the Bilbao priest Pedro Arrupe , renewer of the Society of Jesus.

At the entrance to the footbridge, from the Churruca quay, is the sculpture “Begirari IV (El Vigía)”, one of the last sculptures by the Basque sculptor Eduardo Chillida (1942-2002). 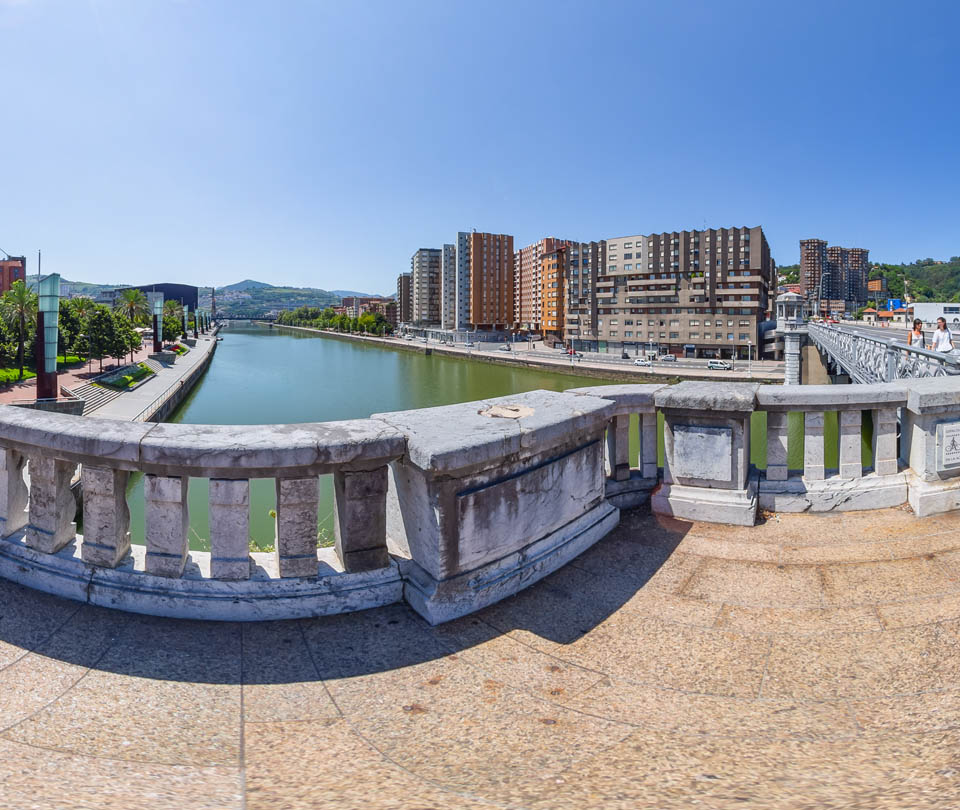 Work of the engineers Ignacio Rotaeche and José Ortíz de Artiñano, and supervised by the municipal architect Ricardo Bastida.

Designed as a bascule bridge to allow river traffic, the works were completed in 1936 and it was subsequently destroyed during the Civil War.

The bridge can be accessed from the Churruca quay, by lift and stairs, from the other bank by Ribera de Botica Vieja, access is by stairs. 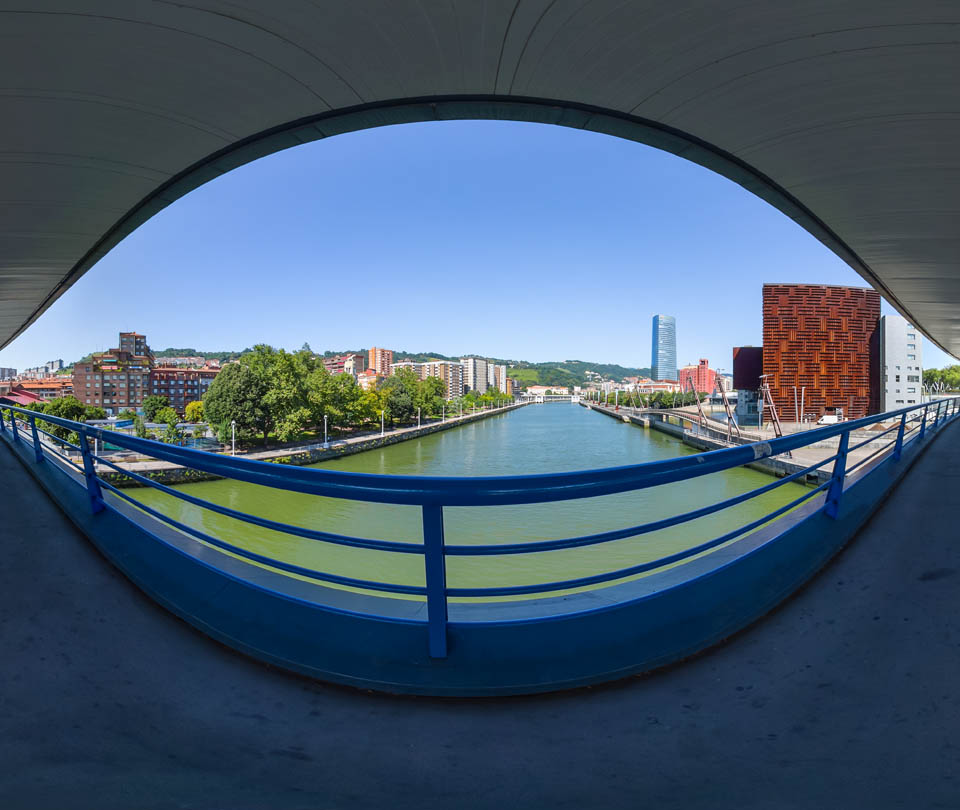 The inauguration of this bridge took place on 18 April 1997 and its author was the engineer Javier Manterola.

The Euskalduna Bridge is built with a solid metal structure, is more than 250 m long and 27 m wide, curved and with a wide canopy that protects the pedestrian area and the bicycle lane.

Like the Euskalduna Conference Centre and Concert Hall, it takes its name from the shipyards that were located on the same site and closed down in the 1980s.

On the right bank, spiral staircases around a 45 m high lighting tower give access to the bridge.